Craft chilling tales that thrill the imagination with Katherine’s Collection.

Posted by Witches of Halloween on 21st Oct 2021 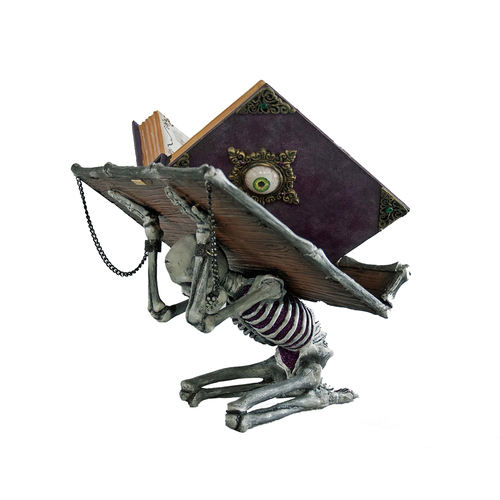 Do you like scary stories? – Sit back and get comfortable, because tonight I have a chilling tale for you. A truly terrifying account of a single decision and its consequences. Come closer, and enter the world of Katherine’s Halloween Collection… 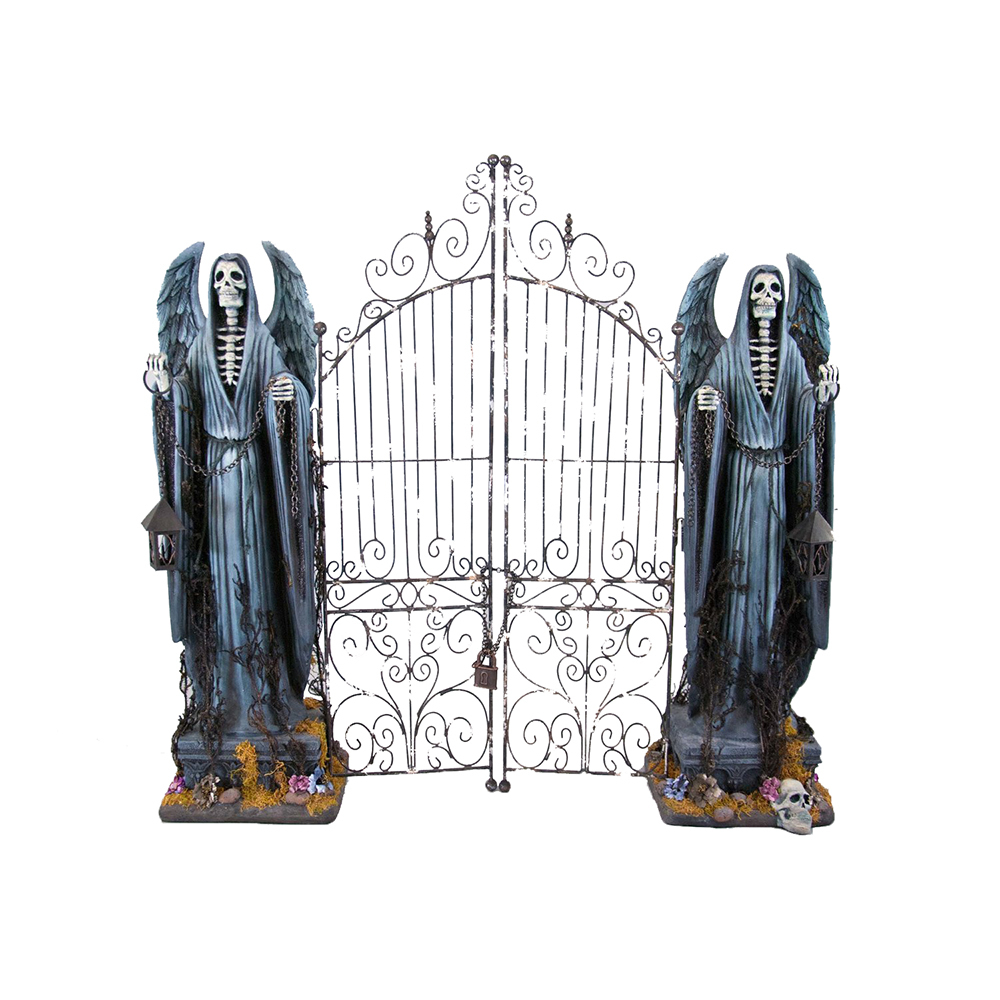 One moon-drenched Halloween night, my paramour and I were out for a stroll. We chanced upon a set of majestic gates we had never seen before. Guarded by two solemn angels of death whose robes seemed to ripple in the breeze, they beckoned us ever closer. As we approached, the gates slowly opened.

—I know what you’re going to say. But in our defence, we were young and had a thirst for adventure.

We walked through the gates and found ourselves in a place choked with mist. At first, we could see nothing. Then, we heard a staccato clacking and a woman appeared to coalesce right before us. 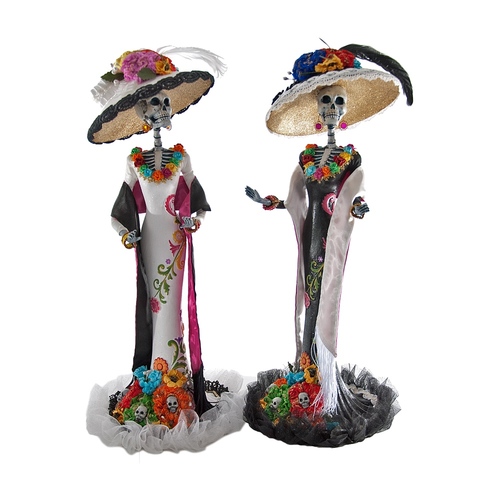 She was rather thin. Indeed, what we had heard earlier was the sound of her bones rattling as she walked. The woman introduced herself as Catrina Calavera. She was wearing a chic gown with a flowered neckline and a flared trumpet hem, a silk shawl, and an enormous hat decorated with feathers and flowers.

The splendid Señora asked if she might join us as we all appeared to be heading in the same direction. She explained that she was heading back to her hotel, Dead and Breakfast. We were glad for the company. 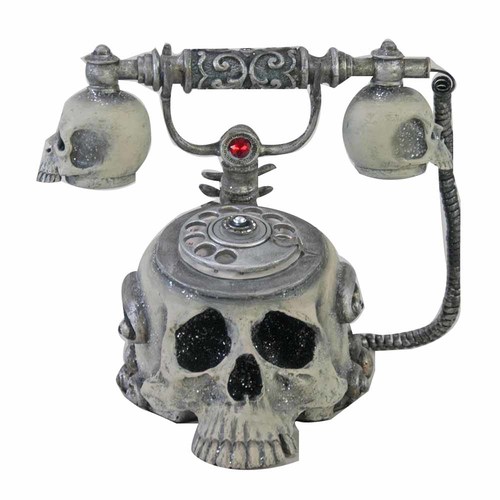 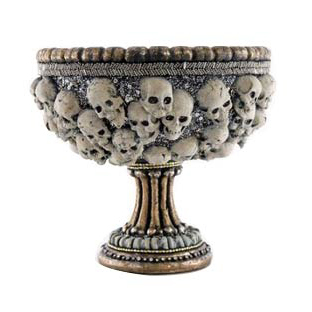 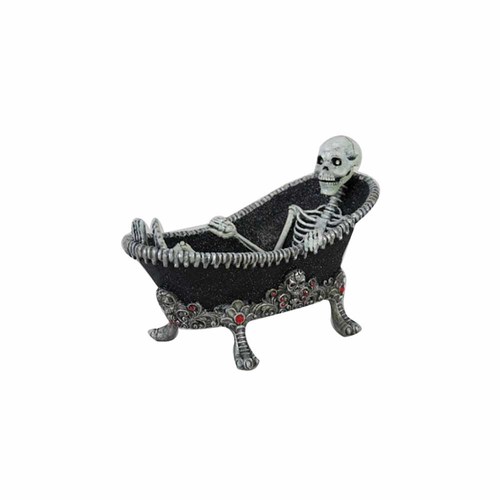 ‘You know, you should enquire about one of their beautiful rooms,’ Catrina enthused. ‘Spacious and immaculately clean, they are also tastefully decorated with underworld relics in honour of its glorious past. It was once an undertaker’s, you know.’

We stopped at a gloriously dilapidated mansion. We thought that we had misheard Catrina but standing in front of the signpost we discovered that Dead and Breakfast was indeed the establishment’s proper name. 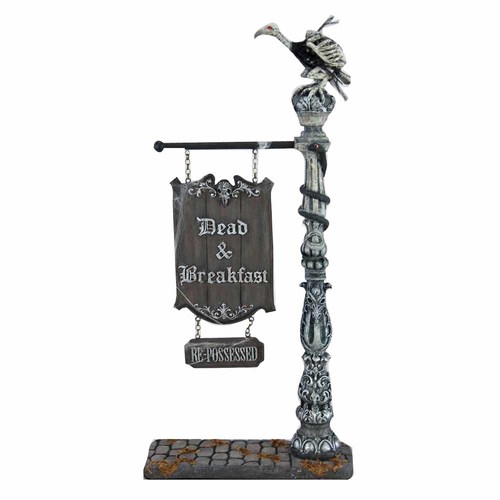 We leant in closer to examine the lettering on the placard and the intricate arcane symbols on the signpost. Luckily, Catrina yanked us back just in time to avoid the snake that was poised to strike.

‘Be careful, cariños. That snake’s bite is worse than death,’ she chuckled. ‘Only the finest hoteliers display the official “Dead and Breakfast” logo, mis amores. Accept no imitations and always look for the undead vulture of authenticity.’ Catrina bid us adiós and hurried inside, complaining of the freezing cold leeching into her old bones. 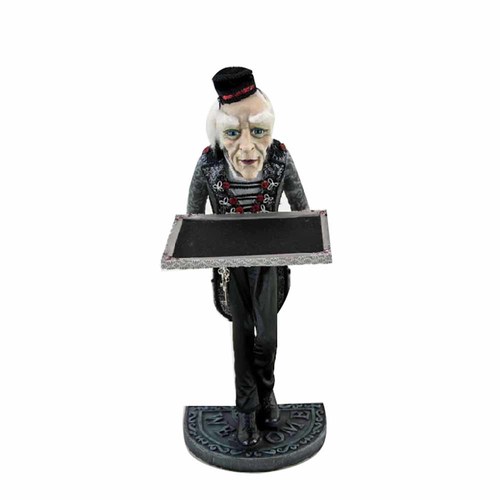 ‘Greetings, gentle ghouls,’ the Bellboy groaned. ‘Welcome to Dead and Breakfast.’ He picked up a tray laden with drinks. We both accepted something that bubbled softly and complimented him on his brocade jacket, especially the silver stitching in the lapels and garnet buttons. The bellboy mumbled a thanks and directed us to reception. 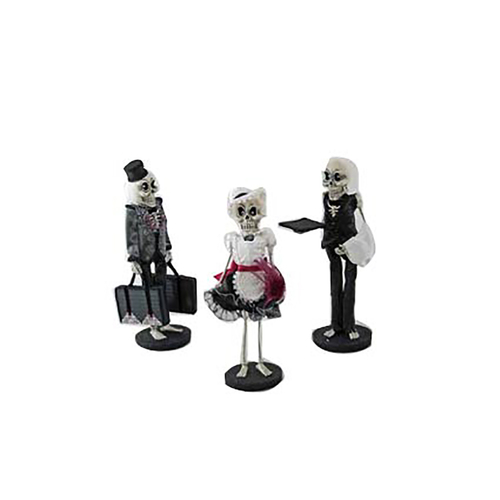 As the made our way across the lobby, the Dead and Breakfast Skeleton Crew were busily going about their work. The maid, waiter, and bellboy all smiled at us as they passed. – But then skeletons are forever smiling, aren't they? 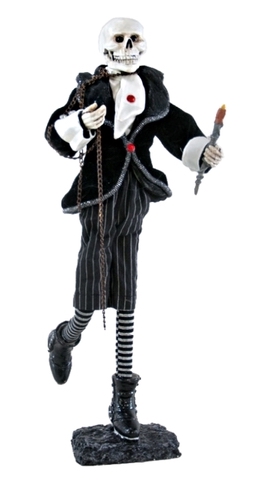 Halfway across the lobby, we heard a faint clinking of chains which quickly built to a terrific clanging cacophony. We stopped dead in our tracks just in time to avoid a collision. This Dead and Breakfast House Guest must be running late for a special haunting. We marvelled at his ensemble: a very edgy blend of a chain-link noose, smoking jacket and cravat paired with pinstriped shorts, striped leggings, and urban utility boots. Bounding past, he screeched an apology. 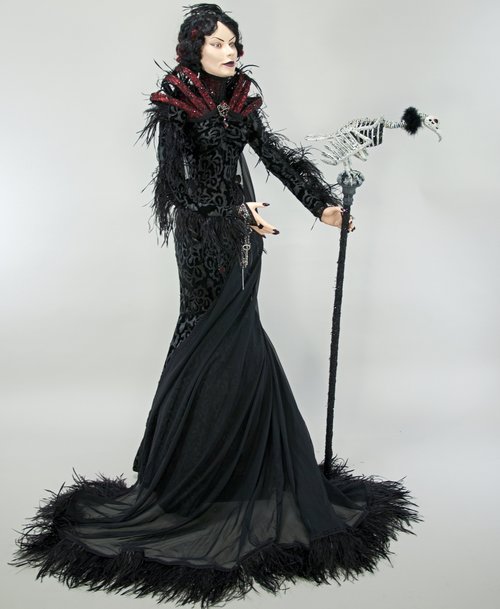 ‘Excuse me.’ The most glamourous woman called out to us. She was dripping with supernatural grace, clad in an ebony brocade gown with a sumptuous chiffon train trimmed with generous marabou. Her statuesque (182cm) beauty threatened to overwhelm us, but we regained our composure just in time.

‘I am the Countess,’ she purred, peering at us intently with her mesmerising amber eyes. ‘I adore meeting new arrivals. Would you care to sup with me tonight?’ She waved an immaculately manicured hand at the skeletal raven perched atop her cane. ‘My friend here makes for poor company at mealtimes, you see.’ Perhaps a little too effusively, we accepted her invitation to supper at 11 o’clock. 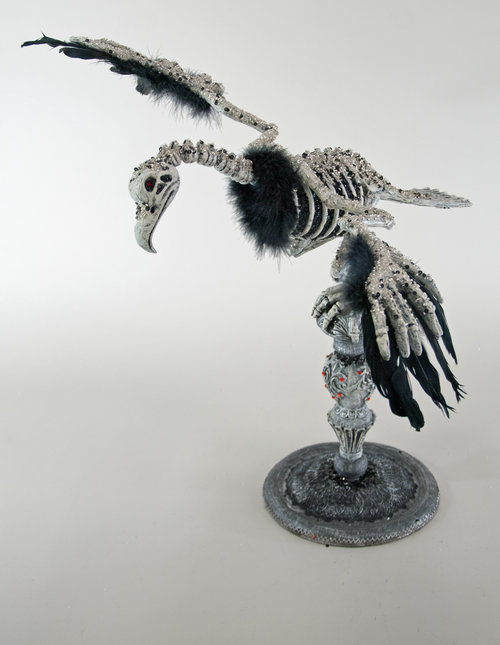 When we finally arrived at reception, we found it unattended save for a jewel-encrusted skeleton vulture poised for flight. They do have a thing for vultures here, to be sure. Just as we began to admire it, we heard a great howling emanate from an imposing antique mirror behind the desk. Along its frame, imps glared mischievously with glowing garnet eyes and snakes slithered. 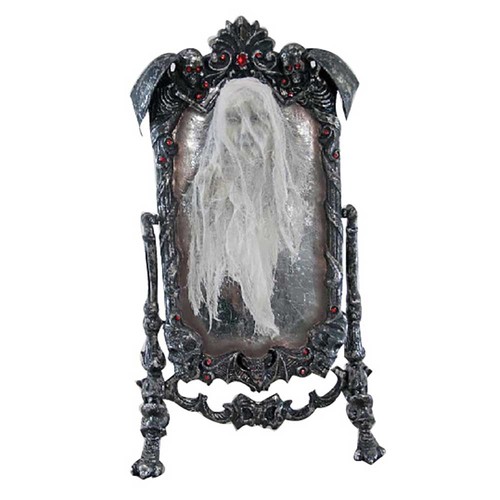 A shrouded spectral form emerged from within the glass. ‘Welcome. We have been expecting you,’ it sighed. ‘You are booked to stay with us...' The spectre paused and stared deeply into our eyes. '... for all eternity!’

—Oh, now don’t be frightened. It’s just a story after all.

Spin your own chilling tales and immerse yourself in imagination when you create holidays of a different colour with figurines, table pieces, and an extensive range of decorations from Katherine’s Collection.