Posted by Witches of Halloween on 2nd Nov 2020 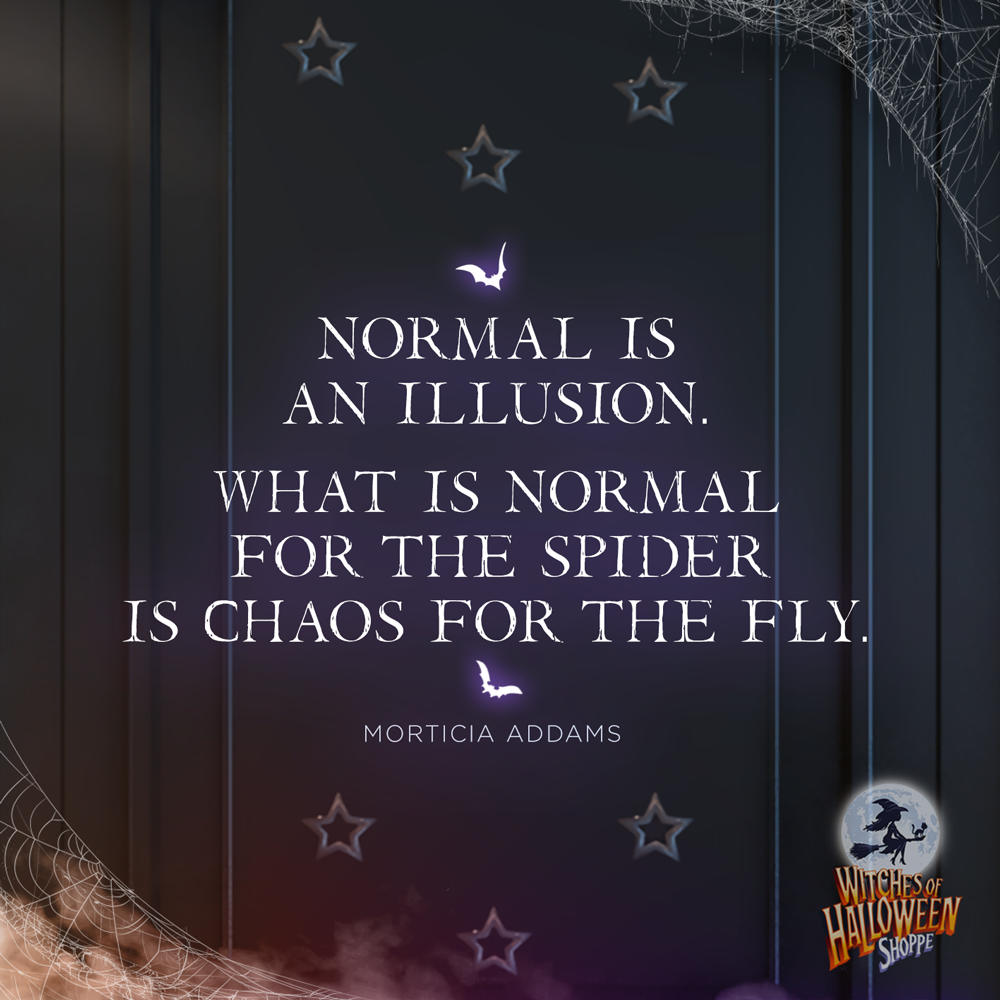 When Charles Addams drew cartoons featuring a decidedly strange family for the New Yorker in 1938, little did he know that his charmingly odd characters would continue to garner fans and admirers for generations. Since their humble beginnings, The Addams Family have gone on to star in television shows, feature films, a musical, and several video games. They also appear on a wide range of memorabilia, including toys, clothing, and more. Witches of Halloween are proud to honour Addams Family values with a selection of collectible figurines and decorative props. Get ready, because you’ve been invited to an evening with the ‘kooky, mysterious and spooky’ Addams family…

You weren’t about to decline an exclusive midnight invitation to visit the Addams Family! Your taxi trundles down a dark, deserted laneway and pulls up in front of a solitary property. You pay the taxi driver and tell him to keep the change when you see how badly his hands shake. 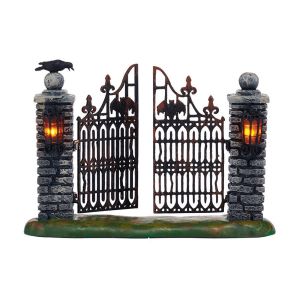 Stepping out into a chilly, pitch-black night, you stand in front of the Spooky Wrought Iron Gates to the Addams Family estate. By the meagre light of the lanterns, you notice the gate’s bat-in-flight crests, but for the life of you, you cannot see an intercom. You tentatively push on the gate and it creaks open just enough for you to pass through. A raven croaks a reproof, and you hurry up the gravel driveway to the main house with its windows aglow. 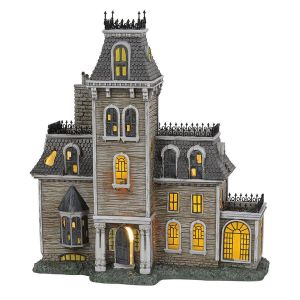 Be it ever so horrible, there’s no place like home. The Addams Family’s ancestral seat may look dingey, draughty, and derelict-looking, but that’s just how they like it. After all, ‘every trap door is in good repair’. The entire mansion radiates an eerie yet friendly glow from within thanks to a 120V globe.

Topped by a mansard roof with metal cresting, a four-storey (28cm tall) signature tower dominates the Addams Family House’s weatherboard-look façade, sculpted from quality resin. Mysteriously shifting shadows draw your attention to a quaint conservatory snuggled against the right side of the house. Who could be gardening at this hour?

Quirky windows highlight the house’s eccentricities. With apparently little rhyme or reason, some have well-maintained, ornate panes, whilst other are at pains to keep what’s left of their shutters attached. Is that hole in the roof at the far left a DIY project gone wrong, or is something else more sinister at play?

Suddenly, you feel eyes on you. Someone’s watching you through the lowest tower window. It’s rude to keep the family waiting, so best step lively… 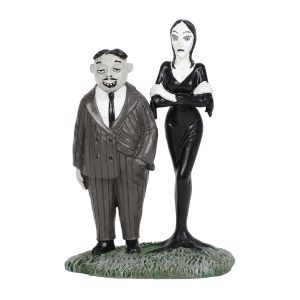 You’re poised to knock on the front door when it swings open to reveal your hosts. Gomez and Morticia Addams. The patriarch and matriarch of this freaky family stand in the foyer, ready to greet you. ‘Welcome to our home!’ announces Gomez. He beams, giving you his most disarming gap-toothed smile. Next to him, Morticia glowers in her chic black gown. This 7.5cm figurine duo prove that opposites do indeed attract. 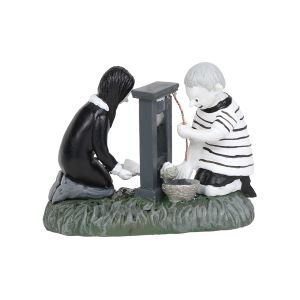 ‘Walk this way,’ Morticia murmurs as unseen forces close the front door. Effortlessly gliding down the hall, she leads on a tour of the house. As your group passes the library, Gomez calls out, ‘Having fun, children? Pugsley, Wednesday, say “hello” to our guest.’

Peering into the library, you see a boy and a girl playing with a doll…and a guillotine! Wednesday mumbles ‘hullo.’ as she positions Dolly in her final role as Marie Antoinette You have a fair idea of what happens next and choose to avert your eyes just as Pugsley releases the cord. Poor Dolly!

Your hosts escort you to the lounge. They invite you to sit and have some light refreshment. Perhaps a nightcap? Truth be told, you’d love a cuppa to help ward off the chill. Morticia pulls a noose hanging from the ceiling. A cacophonous gong sounds off and makes your teeth vibrate. As the gong fades, someone just behind you drawls, ‘You rang?’ 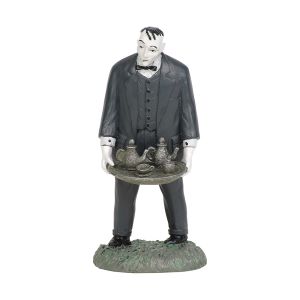 The Addams introduce you to their butler, Lurch, who has mercifully arrived with tea, coffee and biscuits. Lurch serves everyone then stomps heavily out of the lounge to fetch the children. 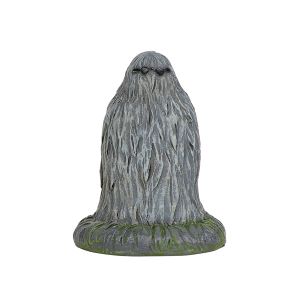 Lurch returns with the children and a surprise visitor. The famous Cousin Itt has dropped in on a whim. You’re truly starstruck: Cousin It is a big star with his own reality show, ‘It and a Bit’. Asking for his autograph would be tacky, but maybe a selfie… 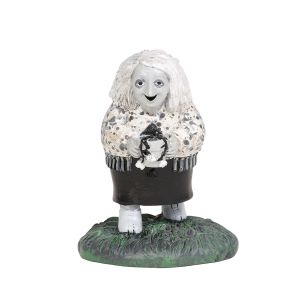 Before you get up the nerve to ask, Morticia’s mother Granny Frump appears. She’s come to show Morticia her ‘gangrene thumb’ skills. Morticia explains that Granny’s success with killing houseplants is unparalleled. ‘That reminds me, mama. It’s time to feed Cleopatra.’

Gomez asks if you’d like to accompany them to the conservatory to meet Morticia’s carnivorous pet plant, but you politely decline. You neither want to become dinner, nor loose yours. Gomez escorts you out, lamenting that you didn’t get to meet Fester. 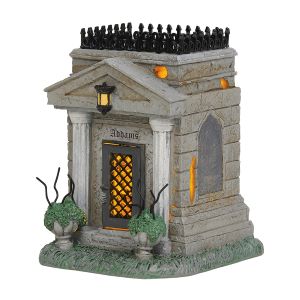 You thank your hosts and bid farewell to the Addams Family. Although it is late, you decide to take a slight detour past the renowned Addams Family Crypt on your way to meet your taxi home.

As you admire the crypt’s fine craftsmanship and hand-painted detail, a supernatural glow emanates from within, and the door begins to slowly open with a strangled creak. A hand appears at the side of the door and you freeze. Have the ghosts of the Addams’ dearly departed decided to dance in the darkness? – No, silly, it’s just Thing! You offer one another cheery waves. 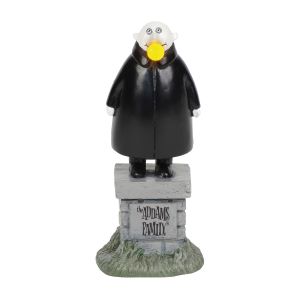 As you near the gates, a light suddenly appears up ahead. There’s Fester! He finally made an appearance. Fester Addams has received many shocks over the course of his mad existence, and now he is a master of electricity. He’ll prove it by demonstrating his trademark light bulb trick. You applaud, thank Fester, and hustle to the gate. When you pull out your phone to check on the arrival of your taxi, it’s dead. Fester better not have run away. You’ll need him to perform an emergency recharge!

Collect the complete set of Addams Family figurines and light-up decorative pieces to recreate your favourite moments from their classic misadventures or concoct tales of your own. Pay a call on the ‘altogether ooky’ Addams Family this Halloween. 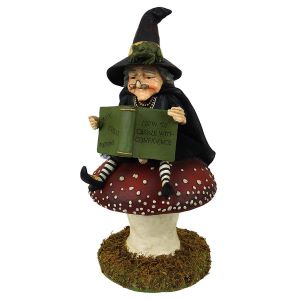 Bethany Lowe’s passion for inspiring others to build special holiday traditions led her to create her own range of holiday and everyday décor and figurines. Using sustainably sourced and recycled products whenever possible, specially selected artisans fashion and paint each unique Bethany Lowe Designs figurine and tabletop piece by hand.When creating her Halloween range, Bethany Lowe draws on childhood memories [...]